There are very few places that I have visited that blend my two favorite science topics (Geology and Astronomy) as well as the remarkable location called Meteor Crater in Arizona.  It has been on my Bucket List for some time, and over Thanksgiving break I got to visit this amazing location.  The museum is a fabulous learning center for people of all ages who are curious about this amazing event in Earth’s history.  Although it is now universally accepted that an object from space hit earth approximately 50,000 years ago, it took many years of study for this to be true.  There was much debate about whether this feature was a geologic feature such as a volcanic crater, or an astronomical feature formed from an object from space.  We now know that there have been multiple objects from space that have hit Earth at various times in the past.  The museum discusses the history behind our understanding of this impact site, from both an astronomical and geological point of view, as well as other impact sites from around the world.  The picture included here is of the rim of the crater, which clearly demonstrates the overturned rocks from impact.

Standing on the Rim 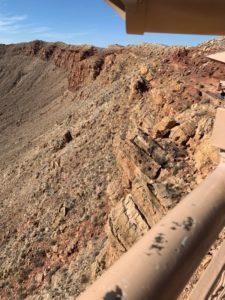 Standing on the rim of the crater, it feels approximately the size of a large football stadium.  Peering down at the crater floor through binoculars you see a figurine of a person.  However, this “person” is completely invisible from the rim without the use of a telephoto lens.  I began to wonder about the size comparison between this impact site to the Mile High Stadium that I have visited.  Inside, I was shocked to read that crater floor was large enough to fit 20 football fields!  What an impressive site.

I have lamented the fact that this spectacular science center and geological and astronomical spectacle are so far away from my classroom.  It is one of the locations I have chosen for my “Ultimate Geology Bucket List” sites!  Now that I have visited this location, I am extremely confident that it is worthy of a most spectacular geologic locale to visit and study!  Have you been to this amazing location?  I highly recommend visiting if you ever drive along highway 40 in Arizona.  I also recommend checking out my “Ultimate Geology Bucket List” activity on my TpT site.